Move Creations makes gear to help get you into better climbing condition and improve your technique. Officially, it began in February 2016. But training gear goes back a long way with me.

1978 – 1985  I’ve been making my own climbing training gear pretty much from when I started climbing — way back in 1978 as a kid in Issaquah WA. First, I tried making a thin-hand crack behind our horse stable, building it out of leftover concrete. It was too short to be of much use. Later, as a physics and math undergraduate at the UW in Seattle, I obtained some metal tubes and constructed something resembling uneven gymnastics bars, which nearly filled up my apartment bedroom. It was hard to get to the bed, but I certainly practiced my pull-ups.

1989 – 2013  Later, in graduate school, around 1989-93, I made a tilted board for foot-assisted pull-ups, which my wife kindly let me keep in our garage. My post-doc and faculty years at the University of Arizona left me without much time for training. But later, living in Japan, I made a new tilted board in a small office building that I had build in our yard. An even more extensive training center was built in my garage after moving back to the Pacific Northwest in 2010. 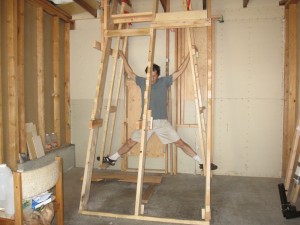 Above: Me on the “spread-eagle machine” at the “Redmond International Training Centre” (my garage) in about 2012. In front and to the side of me are a few pull-type stations, a dip station, and an abs station. In back is a crack machine (right) and “high-kick” board (left).

2014 – 2016  In 2014, while working on a snow-crystal research grant in Canada, I made the first footboard. Various revisions and other training gear followed. I met Sujay Madhok in 2015, and he gave me many new ideas that I built into the training gear. In 2016, I stopped the ice research and started devoting all my time to Move Creations. 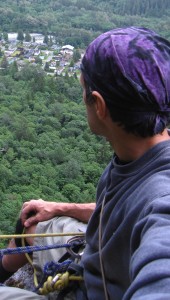